They came for education, and had to run for their lives 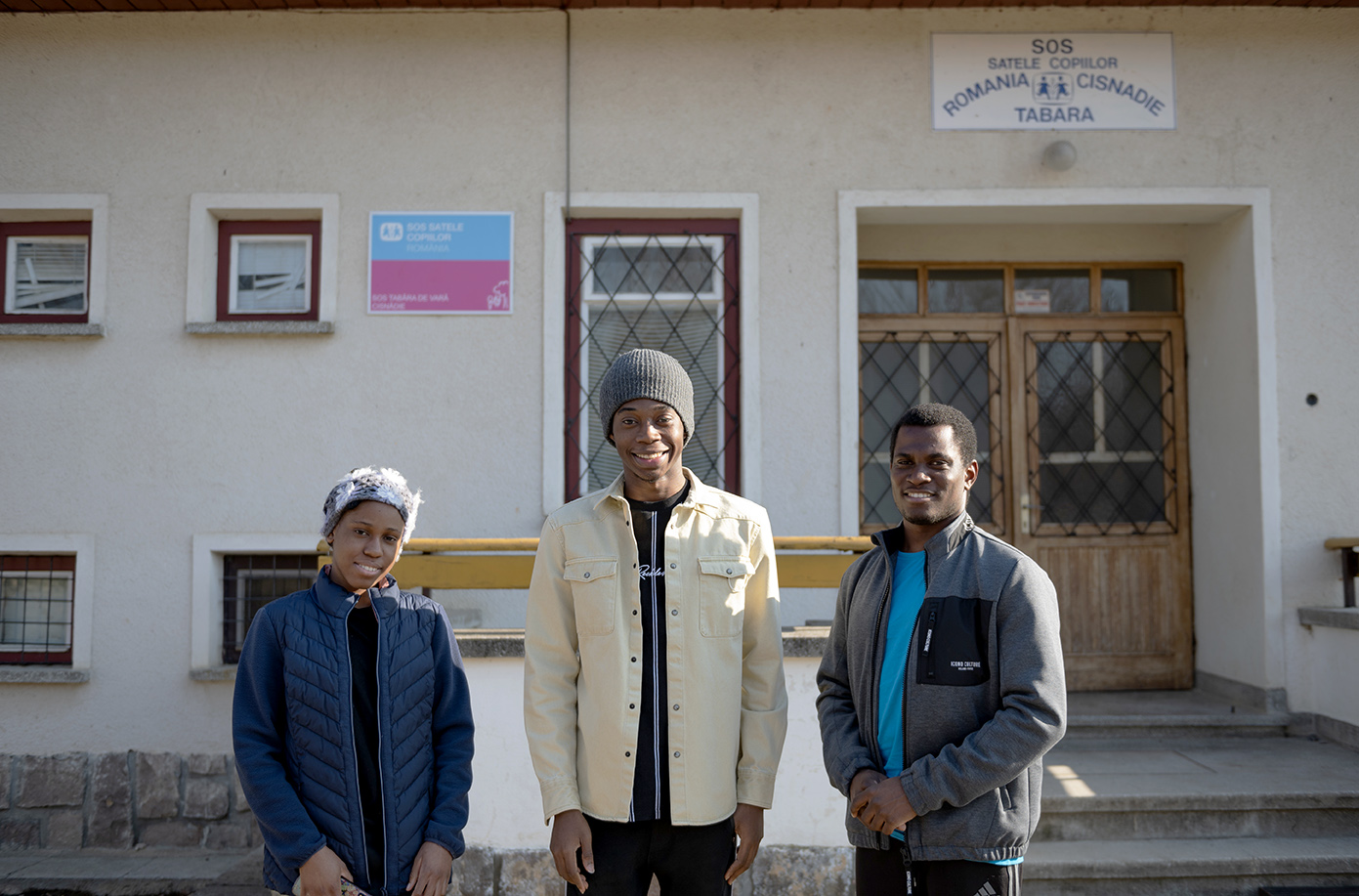 Samuel, Eronmonse and Eseohe moved from Nigeria to study at the Kharkiv University in Ukraine. Their hard-earned academic prospects and their very lives were ruthlessly endangered when the Russian Federation launched a war on Ukraine.

Samuel, Eronmonse and Eseohe share their stories of survival, their feelings and experiences, and their undeterred plans to go on.

“On 24 February at 5 am, a friend called me. He said there were explosions. I looked outside, saw smoke rising. I saw rockets landing on nearby buildings. I could see it clearly from my dorm room on the eighth floor. I panicked. I called back my friend and said we need to get food.”

Samuel and his friend took to the streets in search of an open supermarket. They saw long lines of people waiting to stock up. “Most shops were practically empty,” Samuel says. “We managed to buy a few things, got water from a pharmacy, and went back to the dorm. We were charging our phones when they told us to get to the basement. We stayed there until 02 March with chairs to sit on the first day. They later provided beds but space in the basement was limited until people left.”

It was around that time that Samuel, a fourth-year aerospace engineering student, met with siblings Eronmonse and Eseohe. Samuel was the last foreign student in his dorm, and connected with the siblings over the phone.

“When I read that Viktor Tolmachev, the chief engineer of the world’s largest airplane (Antonov An-225 Mriya, destroyed on Antonov Airport during the war, author’s remark) graduated from the Kharkiv Aviation Institute, I knew I had to go there,” Eronmonse passionately explains.

His sister Eseohe initially searched for medical studies in China and Taiwan, but decided on Kharkiv as well after discovering that Chinese and Taiwanese universities didn’t admit foreign students due to the pandemic.

Eronmonse and Eseohe say they didn’t expect that Thursday of 24 February to be any different than the day before when they went to classes. “I stayed up really late on the Wednesday,” Eronmonse explains. “I had a lot to study and fell asleep in the middle of the night.” The first explosions woke him up, but he didn’t think much of it. “Who disturbs me? I thought. I need to sleep because I have school later.”

A friend of Eronmonse ’s ran into his dorm room telling him to pack what he can. “My friend said classes are cancelled and we all need to get to the basement,” he explains.

The three of them, like many students, occasionally went up to their rooms to cook food, charge their phones or call their parents because there was no electricity or cell phone reception in the basements.

“My parents didn’t sleep until I came to Romania,” Samuel says. “It affected their health.” Eronmonse adds: “When our dad could speak to us, he was fine. Our mom… well, let’s say she was under the weather.”

“We saw heavy equipment, tanks on the streets. It was very risky to go outside, yet we had to. At one point, only the school building had electricity, so we were going there to charge our phones. Once, a friend was keen on charging his phone to 100%. We all wanted to leave, and he insisted he’d stay to fully charge. When he was coming back, two missiles flew over his head. That changed his mind about staying behind to have full battery,” Samuel says with a laugh, then changes to a sombre tone: “Two students from India were killed. One while trying to find food, and the other on Freedom Square.”

“You get used to the sounds,” he adds. “The sound tells you if the explosion will be near or far. They were always shooting at around 5-6 am, just when the curfew ended. So many people died…”

“Ruins everywhere. We saw ruins all around us. You feel every explosion. It’s like I’m still feeling it now,” says Eseohe.

Eseohe adds that she never expected she’d had to leave Kharkiv. “That Thursday morning, I couldn’t sleep for some reason. I usually wake up around 7 am, but 24 February felt like something is wrong. When bombing starts, the first thing you do is pack quickly and run to the basement. We had to go out of the basement to make phone calls. Then you hear the booms and run back down.”

Despite the escalating fighting, Eseohe had high hopes that things would become better. “Only they weren’t getting better, they kept getting worse,” she says. “We were running out of food, electricity went out. An explosion literally cut our street. This delayed our departure for a full day.”

On 04 March, Samuel, Eronmonse, Eseohe and eight other foreign students decided to leave together. “I charged my phone to 30% on my laptop. I called my parents, told them we were going to leave.” Eronmonse and Eseohe had called Samuel earlier and made plans to leave to the train station by taxi.

“I called a taxi on the morning of 01 March,” Samuel says. “The price was ten times higher than usual. When I called back couple of hours later, the price had increased even higher. I understand why that was so because the taxi drivers were really brave and risking their lives to transport people.”

When they realised that a road blockage prevented the taxi from coming, the dormitory organised transport for the students to the train station for the next day. “We waited for hours,” Samuel says. “The first train came and we couldn’t get on it. Women and children only, they said. Second train – the same, third train – the same. We waited maybe eight hours before finally boarding the fourth train.”

Eseohe was allowed to board the third train and got separated from the group. The Lviv-bound train took about 20 hours to arrive. “It was very uncomfortable. We were standing the whole time because there were so many people, you couldn’t sit on the ground even if you wanted,” she says.

Eseohe recalls the Kharkiv train station from which they left. “It was packed. All people were in panic. And people kept on coming. The lines were huge. People running, holding children, tripping. It was very intense. At the entrance guards were shouting ‘women and children only’. That’s how I could board a train before my brother and Samuel. I wasn’t scared doing so, but I felt very lonely.”

Eronmonse and Samuel called friends who left earlier and arranged for them to help Eseohe in Lviv until they arrived. “I was worried about my sister, but knowing she was on a train, and then getting on a train myself felt safety is near. The train slowed as it approached Kyiv. We were afraid that the 40-mile-long line of vehicles that was on the news would stop us. When we passed Kyiv, I sighed thinking all will be OK. The train ride took about 30 hours.”

The group had pre-agreed to head for Romania, but along the way the other eight students decided to go to other countries. Samuel, Eronmonse and Eseohe continued to Romania entering the country near Baia Mare on 04 March. They stayed there for a week with local volunteers until a car from SOS Children’s Village Cisnădie came to pick them up.

“Our father works for SOS Children’s Villages as Regional Programme Development Adviser for Youth Empowerment for region Eastern and Southern Africa,” Eronmonse says. “So, we knew what to expect, but we got so much more. We haven’t had to cook since we came here until recently,” he says with a smile.

“I got my first real sleep here,” Samuel adds. “Everyone is nice and friendly. It really makes us relax.”

Eronmonse says that the traumatic experience doesn’t simply go away once you reach safety. “You develop a habit of being unconsciously awake. Noises of people, even natural noises sound like explosions. At first, everything around you is foggy, and you are not sure where it comes from or what it is exactly.”

Eronmonse and Eseohe’s parents advised the three to get professional psychological help. “This really helped me,” Eronmonse says. “I was leaving each session smiling. Now I feel fine.”

Eseohe says she still has a way to go: “I am better now, but I am not totally fine.”

Samuel, whose hobby is gaming, says that he was able to return to playing shooter games. “It really doesn’t bother me, but now I experience the sounds differently because I know they sound real.”

Despite their traumatic experience, the three brave young people are determined to continue with their education. They haven’t given up on returning to Kharkiv when the safety and security situation allows. For now, they continue their studies online. “I need three-four months until I graduate,” says Samuel. “Then I want to enrol to a master’s programmes somewhere in Europe or North America.”

Eronmonse and Eseohe say the COVID-19 pandemic had gotten them used to online schooling. “We had a stop in the university classes for about three weeks, but all mostly restarted online,” they say. “Most of my teachers are women. They are abroad and restarted the online classes,” Eseohe explains reminding that Ukrainian men aged 18 to 60 are not allowed to leave the country due to the general mobilisation.

“Our schools provided all materials online. I left some notes behind, but I don’t worry because I can find everything online,” the future doctor says.

“The most important thing is that we are safe and well,” Eronmonse says. “Our parents are at ease now and we feel good. The solidarity and generosity of the Romanian people, and everyone here at the SOS Children’s Village really help us – they lifted our spirits.”

Since the start of the war in Ukraine, over 200.000 foreign nationals fled the country, among which were young people who came to Ukraine in hopes of getting education.